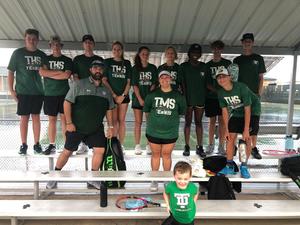 This year, Taylor Tennis may not have made the playoffs for Team Tennis in the fall but they were far from disappointing to watch. They finished District 19-4A with a record of 2-4, which was just 1 win away from being in the playoffs.
The Ducks missed the playoffs by 1 point and when it was all said and done only missed out on third place by 2 points. Key members of the team were Senior players Trey Boles, Jackson Schroeder, and Troy Glenn. Boles and Schroeder played together as a doubles team and only lost one match game to Lake Belton HS. Due to being short handed, they were paired separately against Academy which could have been another win. Other key members were Junior players Jake Jansky and Hayden St. Clair. As a doubles team their only loss came against Lake Belton as well. Again due to circumstances, Janksy and St. Clair couldn’t be paired together against Lago Vista and Academy.
These two doubles teams dominated non-district as well. They handled Bastrop and Pflugerville Weiss respectively. Gatesville gave the boys doubles all they could handle and both teams were defeated. Troy Glenn was a solid line 5 player and his only losses came to Academy and Lake Belton after both matches had already been decided. Junior Bodie Randing was also solid line 6 seed and was a great partner with Troy Glenn. Bodie played consistently and had some great matches in both singles and doubles. On the girls side Molli and Maci Kennick showed toughness and Krista Randig was our most consistent player. Maci and Krista were the bright spot for the girls scoring points for the team in 3 district matches. These three freshman ladies are a bright spot for the upcoming spring season and the future of Taylor girls tennis. Senior tennis player Presley Mikulencak got her first district win against Jarrell in our last home match.
Taylor Tennis has a bright future with the upcoming underclassman but will miss the upperclassman boys. Duck Tennis will continue to put in work as we head into the spring season. This year will be a realignment year and next year's fall team tennis district lineup should be interesting to see. We are looking forward to an exciting Spring Tennis season and ready to DO WORK! Let's Go Duck Tennis!
Taylor Tennis - from Coach Stresing:
Print