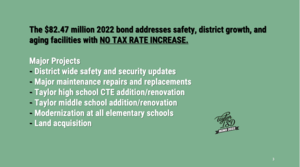 The Taylor ISD Board of Trustees at its regular monthly meeting set the district's tax rate of $1.28 for the 2022-23 school year, and accepted the Community Advisory Committee's (CAC) recommendation to call a bond election in November.
For the fourth consecutive year TISD lowered its tax rate, helping the district maintain its standing as having one of the lowest school district tax rates in the area. Through wise financial stewardship by the district, the average TISD homeowner saved more than $300 per year when compared to 2020.
If approved by voters, the proposed bond will not raise the district's overall tax rate, while allowing more than $82M in improvements that will touch every part of the school district. The proposed bond, unanimously approved by the Community Advisory Committee, includes safety renovations and additions, major maintenance repairs, general school renovations, land purchases for future district facilities, and the expansion of Career and Technology Education (CTE) opportunities in the district.
"The process we used and the recommendation by our community advisory committee helped prioritize our current needs within the district that included safety and security for our staff and students," Board of Trustees President Marco Ortiz said.
In the coming months, TISD will provide the community factual information on how bond funds will be used on capital improvement projects across the district so voters can make an informed decision in the November, 2022 election.
You can find out more at our Bond 2022 website.